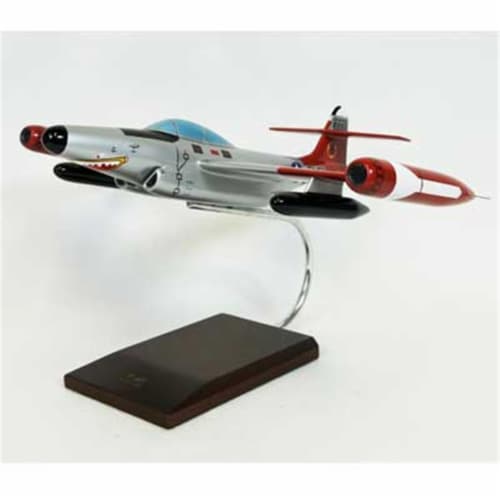 The Northrop F-89 Scorpion is a twin-engine all-weather fighter-interceptor designed to locate intercept and destroy enemy aircraft by day or night under all types of weather conditions. One of the most heavily armed fighter aircraft it was the backbone of the United States Air Force s (USAF) Air Defense Command (ADC) for over 17 years helping patrol the skies during the period when Soviet intercontinental bombers first became a threat. The F-89 was the first aircraft armed with nuclear weapons (the MB-1 Genie rocket) for air-to-air use. The Scorpion was a result of a 1945 US Army Air Forces specification for a jet-powered night fighter to replace the P-61 Black Widow. It was the first multi-seat all-weather jet interceptor and the first aircraft designed to carry an all-rocket armament. Its advanced radar system was capable of tracking and engaging hostile bombers in any weather. A unique feature added to the prototype during development was the deceleron a two-part aileron that could split open to act as an air brake. This feature became Northrop s trademark and is still being used today as can be seen on the B-2 Spirit. The F-89 s name came from its resemblance to a scorpion ready to strike. The name stuck and was later officially recognized by the Air Force. The aircraft made its maiden flight on August 16 1948. The first production F-89A was accepted by the USAF on September 28 1950. Only eight aircraft were completed before the type was upgraded to the F-89B with new avionics. Unfortunately these had considerable problems with engines and other systems and soon gave way to the F-89C. The first major production model was the F-89D which first flew on October 23 1951 and entered service in 1954. On July 19 1957 a Genie test rocket was fired from an F-89J the first time in history that an air-to-air rocket with a nuclear warhead was launched and detonated. There were no new-build F-89Js but 350 F-89Ds were modifi