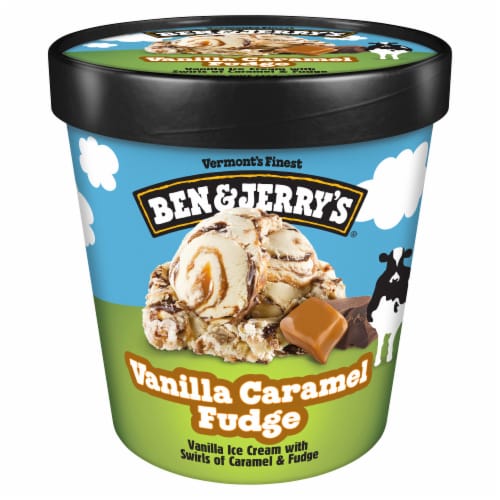 Vanilla ice cream with a gooey caramel swirl and fudge swirl. If you’ve been looking for reasons to try something chunk-free from Ben & Jerry’s, then this flavor packs a punch. Vanilla-rich, fudge-a-licious, and caramel-gooey—it’s pint perfection. Enjoy! 1994 was a crazy year. The hit television show Friends debuted, Amazon and Yahoo both launched, and Ace of Base topped the charts. Yet all of that pales in comparison to the year’s greatest gift to humanity...the unveiling of Ben & Jerry’s Vanilla Caramel Fudge premium ice cream. It received rave reviews, melted spoons, and ruled the red carpet. Yet fame and fortune never got to its head. Here we are over two decades later and this classic still satisfies fans looking for a smooth and creamy flavor that is free of Ben & Jerry’s trademark chunks. The ‘90s may be a blur, but what remains is Ben & Jerry’s commitment to producing the world’s best homemade ice cream in the most responsible way possible.